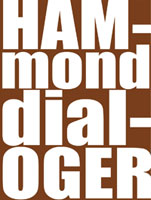 After having played the Hammond B3 organ for a good while, I wanted to explore a much broader approach to this fine instrument. That included exploring new sounds, playing techniques and ensemble roles. As a part of this approach I decided to play a series of concerts with small groups engaging many different musicians playing instruments not usually heard accompanying the hammond organ. The aim was to put myself in situations where I could explore the different sonic and instrumental possibilities that occur when meeting these different instruments and personalities.

I believe that in much the same dialectical way as in a spoken conversation one can also come to new insights through musical dialogues, and that this can be a good way to explore new instrumental and musical territories. Hence the concert series “Hammond Dialogues”.

Some of this project is documented on the triple album titled “Hammond dialogues” which in addition to the solo recording “At Large” contains the two live recordings “Organ Point” – a duo with Nils Henrik Asheim on church organ, and “Twined”where the Hammond organ is joined by a string trio consisting of Michael Duch (bs), Lene Grenager (cello) and Bergmund Skaslien (viola).

Excerpts from live recordings not released: